Traveling across space and time to make first contact, explorers discover a terrible predator. Now only a band of time travelers stand between humanity and the long dark. For Season One, go here.

Ansible: Rasha's Letter -  the opening episode of Season Three - is available as an add-on when you purchase Ansible: Season Two on itch.io.

The previous Ansibles found themselves marooned, but Zahid, last survivor of "Ansible 15718," commands an interstellar fleet, and Sahira, the psionic savant we meet in "Ansible: Night Land" and "Ansible: Strike Force," will take the battle to the pneumavores, humanity's fiercest predators.

In Season Two of Ansible, humanity's last conflict continues to blossom open, dark fire and dark flower, torching all of time and space. These are your descendants' stories. Their cries in the dark. They are not to be missed.

Ansible: Season Two is complete and available for purchase now.

In Season 3, a Syrian refugee, a thirteenth-century librarian, and a hijabi bisexual shapeshifter from the far future must travel across space and time to defend humanity from an intergalactic and devouring evil.

Season Three will include, in one volume, the next three stories in the series:

A Bonus with Ansible: Season Two

Ansible: Rasha's Letter -  the opening episode of Season Three - is available as an add-on when you purchase Ansible: Season Two on itch.io.

"Litore's stories aren't only entertaining. They are stories invading our lives, unexpectedly. You encounter them, as you might encounter people. They are those random elements in life that happen to you, like a mugging, like childbirth, like falling in love and marriage, like death and the funeral that follows. They are moments that leave a mark, and leave you changed." - Andrew Hallam, Ph.D., Metropolitan State University of Denver

"Stant eloquently writes passages that are so moving, full of passion, fury, loneliness, blind drive ... He takes us to places of amazing beauty, awe-inspiring, as well as places where the implications in the story can leave you almost in despair for the human race." - Nikki Ebright, Director, Myths & Legends Con 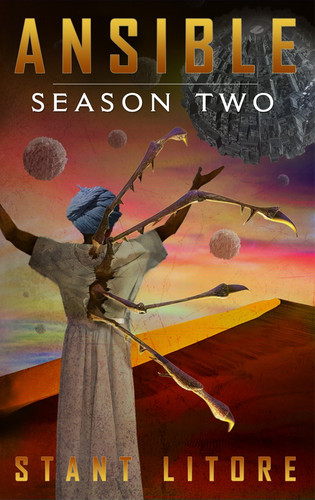