Once each year on orbital space stations, nano-engineered young women compete on the backs of dinosaurs in races as brutal and bloody as any witnessed in the Roman Circus 3,000 years before. Highly skilled and capable of superhuman feats, these gladiators live isolated lives—except for the resurrected beasts with whom they form their deepest bonds. Tonight, on the red sands of the arena and inside the hollow asteroid where the dinosaurs are grown, the secrets these gladiators discover will shake their entire world.

The Running of the Tyrannosaurs

The Patriot Day race in the orbital arenas - Egret thinks she is ready for this day. She has been brainwashed for it, trained for it, shaped and reshaped into a sacrificial model of beauty for the entertainment of millions. Her world is one of strict regimen and fierce competition, one in which others can only be competitors or worshippers, never friends, where lack of perfection is punished by burial beneath the red sands and the thundering feet of tyrannosaurs.

But Egret can’t imagine how this day might change her. How the scream of a tyrannosaur and the cries of the other sacrifices running beside her might break open the steel surface of her world.

It is not a day you will forget.

Meet Nyota Madaki. And her tyrannosaur. Fighting for survival in the far future.

When Nyota wakes in the middle of a forest inside an artificial world, she knows she's in trouble. Her trainer and sister athletes are nowhere to be seen, the airlock to the shuttle bay doesn't respond to her commands, and the night forest is loud with the screeches of atrociraptors and ravenous tyrannosaurs.

Stranded inside the world where massive dinosaurs are grown for the arenas, she will face many perils -- the hunger of nocturnal predators, the crash of starvation, and the devouring rot of a bioweapon unleashed inside the tyrannosaur world while war in space rages just outside.

But Nyota is ready. Inhabited by entire ecosystems of nanites, trained for strength and speed and elegance, capable of feats that would leave others broken on the forest floor, Nyota can handle anything. Anything, that is, except the sudden rush of forgotten memories into her heart. Anything but the realization of who she really is.

Luckily she won't have to face that alone. Not with this tyrannosaur egg hatching beside her...

The Screaming of the Tyrannosaur

"This day has gone long enough without a death."

Taken from her home at a young age, Mai Changying is isolated and trained for life in the arena, competing on the backs of stampeding triceratops and other great beasts resurrected from millions of years in the past. But under her timberwolf tattoo and the ferocity of her competitive spirit, she has a secret desire—a longing for a pack, a family, a people.

Today, in a thrilling race on a privately chartered orbital dinodrome, Mai Changying will shock her audiences with an unexpected and transgressive act that will change gladiatorial combat in the dinodromes forever—and prove that even when everything is stripped from us, our need for kinship and our triumph in seeking it remains.

There will be more fiction in this universe. Work is underway now on a short novella that opens a new series, The Dakotaraptor Riders:

I am still sweaty from taking down that pride of hyenadons, and my lover thinks she can outrace me, thinks her dakotaraptor can slice through the prarie grass faster than mine. But my raptor and I once took a gallimimus in full stampede; we once leapt from a cliff, my raptor catching the wingtip of a swooping queltzalcoatl in her jaws; we skid wildly down the rockface with the great bird crashing and flapping about us, its zebra-striped pycnofiber plumage cutting my face like shards of ice, the entire world a fever of feathers and screeching and tumbling rock, and we survived—and if my lover thinks she can reach the trees first, I am Sasha Nightwatcher, and my dearest Katya is very mistaken.

I think you will find a lot to love in Sasha Nightwatcher's story, as she rides on raptorback across the violet praries of a world under attack, with her leather jacket, her wind goggles, her scarred face, her shockrod and lasso, and her wild joy in life. Expected release of the first story in The Dakotaraptor Riders: 2020.

"This is a pulse-pounding story, a triumph of world-building - a story of gladiatorial combat and of bonds strange and transcendent. Without a doubt, one of the most enthralling stories I've come across." – Samuel Peralta, The Future Chronicles

"Stant Litore turns a concept that would be clunky, camp, or just plain weird in other hands into something as natural as feeling the stretch of your own muscles when you move..." - O.E. Tearmann, author of The Hands We're Given (Aces High, Jokers Wild)

"Wielding elegant prose and tightly-focused characters, Stant Litore cuts deep into the science-fiction realm of bio-engineered dinosaurs and high-tech bread and circuses with a physically enhanced female gladiator whose personal tragedy is as powerful as her victories in the arena. Her story echoes in the heart long after it is told." - Richard Ellis Preston, Jr., author of Romulus Buckle & the City of the Founders

In order to download this book you must purchase it at or above the minimum price of $7.99 USD. You will get access to the following files: 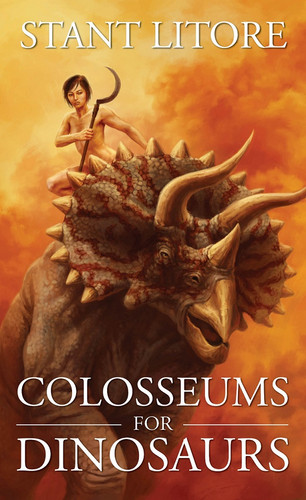